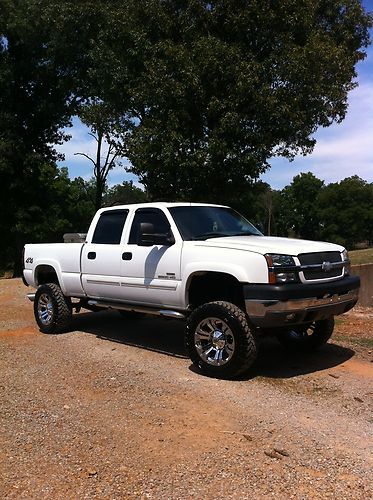 Condition: UsedA vehicle is considered used if it has been registered and issued a title. Used vehicles have had at least one previous owner. The condition of the exterior, interior and engine can vary depending on the vehicle's history. See the seller's listing for full details and description of any imperfections.Seller Notes:"Driver side front door has a noticeable dent. Driver side rear door has a scratch. Both resulted from a piece of pipe that flew up driving down the road. The tailgate has a small scratch and tiny dent in the bottom right corner but its hardly noticeable. There are some rock chips behind the front tires where the mud grips throw rock on gravel but hardly noticeable as well. Center console is cracked but the compartment door still opens and closes perfectly well. The passenger side front fender flare at the very bottom close to the tire has turned off white/yellow. However, these plastic pieces are very easily replaceable. Little bit of paint chipped off right at the driver side front door handle."

Up for sale is a 2004 Chevy Silverado 2500 HD Duramax diesel 4X4. It has a 12 inch lift and sits on 35x12.5 R20 Toyo mud grip tires (65%) and 20" XD Monster Rims. This truck comes equipped with lots of extras.  Performance wise, a 225 HP PPE programmer with 5 settings, turbo and pyrometer gauges that are not currently hooked up, and a 6 inch Silverline exhaust tip.  Audio and video upgrades include an in-dash Power Acoustix touchscreen flip-down DVD player with remote control and a Mobile Dynamic Xtreme (MDX15) screen for the backseat.  This truck also has two 10" JL Audio subs and a Power Acoustik 820 amp. Underneath the Tractor Supply toolbox sits a 45 gallon auxiliary tank that feeds directly into the factory tank, allowing the truck to hold 70 gallons of fuel at one time.

This truck is very mechanically sound with lots of extra power and black smoke that comes with the programmer depending on which setting you desire.  You can expect to get between 12-15 mpg once again it all depends on how high the truck is turned up.  All service and maintenance done personally in my shop.

Only reason for selling, I'm starting Veterinary School in the fall and I need extra income for school.

If you purchase at the "buy it now" price, I will throw in the spare set of 20" MB Motorsports rims that sit on 44" mud tires absolutely FREE!