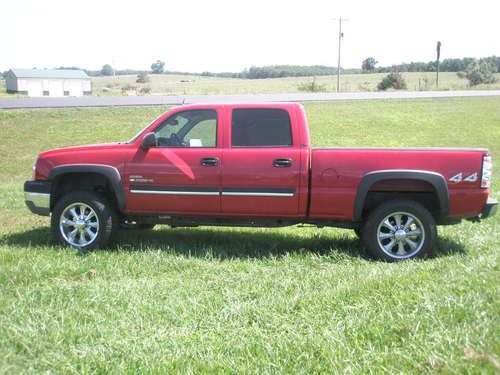 Condition: UsedA vehicle is considered used if it has been registered and issued a title. Used vehicles have had at least one previous owner. The condition of the exterior, interior and engine can vary depending on the vehicle's history. See the seller's listing for full details and description of any imperfections.Seller Notes:"Very nice truck inside and out, loaded up with: LLY Duramax diesel, 5 speed Allison transmission, custom wheels, brand new tires, power leather/heated seats, cruise, A/C, tilt, CD player, stereo controls on stereo wheel, and custom taillights and trim. Has 227,000 miles. Runs, shifts and drives great!Lower right and left rear quarter panel is slightly dented. Has 275/65-20 10-ply tires."

Very nice truck inside and out, loaded up with: LLY Duramax diesel, 5 speed Allison transmission, custom wheels, brand new tires, power leather/heated seats, cruise, A/C, tilt, CD player, stereo controls on stereo wheel, and custom taillights and trim. Has 227,000 miles. Runs, shifts and drives great!   Has new 275/65-20 10-ply tires. This truck has been checked over at our shop from bumper to bumper. View our inventory at mccartysalesllc.com  or email us at  mccartysalesllc@gmail.com.   Have a great day.