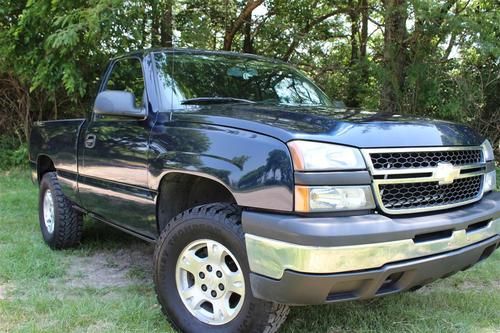 Condition: UsedA vehicle is considered used if it has been registered and issued a title. Used vehicles have had at least one previous owner. The condition of the exterior, interior and engine can vary depending on the vehicle's history. See the seller's listing for full details and description of any imperfections.Seller Notes:"2006 Chevrolet Silverado 4x4 5.3L V8 Regular Cab. Dark Blue Exterior; Dark Gray Cloth Interior. 120,610 miles. Great running / working condition. - 2 inch leveling lift - Mickey Thompson Baja ATZ Radial Tires with only 8K miles on them. - Draw Tite Hitch Installed in 2010. - Spray in Reflex Bed Liner (Better than Rhino). This truck is very reliable and durable. I bought this truck in 2009 with 40,000 miles. I am the second owner."