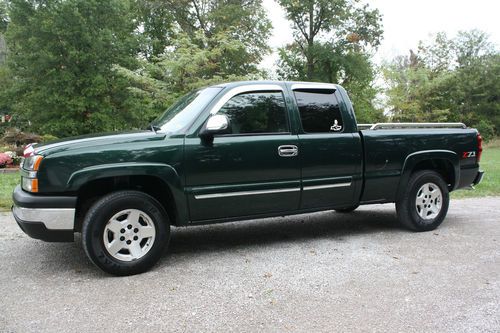 THIS IS MY FIRST TIME LISTING A TRUCK SO FEEL FREE TO EMAIL ME. THIS IS A VERY CLEAN 2005 CHEVY EXTENED CAB 4X4 SHORT BED TIRES ARE 50% WITH BED LINER EXTRA CHROME DUAL EXHAUST. I AM SELLING BECAUSE I HAVE THREE TRUCKS DONT NEED ALL OF THEM. IM THE 2ND OWNER BOUGHT WITH 32000 MILES ON IT. IF YOU ARE THE SUCCESSFULL BUYER YOU MUST PICK UP WITHIN 5 DAYS CLOSE OF SALE AND PUT 500.00 DOWN AT THE END OF SALE WITHIN 24HRS CASH OR CERTIFIED CHECK. TO REACH ME EMAIL coleman@ktis.net