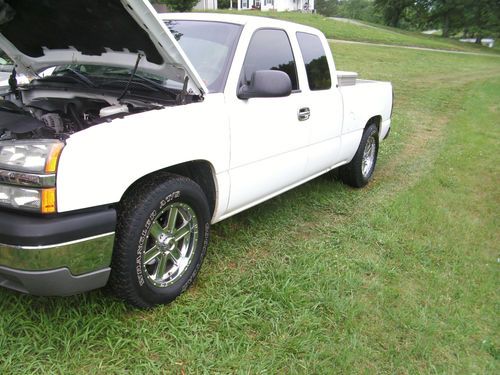 and it is a truck and the bed has been used so it is scatched up inside the bed but the body looks nice as you can see in picture ived tried to tell you everything you might not be able to from pictures and can ask anything you need to know just ask ive had this truck 3-4 years now and its been a great truck but i have 2 trucks and we want to sell one and get a car
it is auto with cd COLD a/c and HOT heat cruise control everything and runs and drives great
has 190,000 or so on it and stills drives GREAT ive had for the last 100,000 miles with out problems
just put new tires a few monthes back so comes with 800 dallors in new tire on it not many miles on them
also has AMERICAN RACING RIMs that cost about 1200 just for them after market grill silver door handles lots extra money extras
and has a altnator with lifetime warrenty on it if it stop working you can take to store and get free new one at no charge at any advance auto
and has a damoind plate tool box also that comes with it and damoind plate rails on bed and tail gate this is a great truck that wont give anyproblems ready to go for you
im asking 6,900 o.b.o. clean/clear title right in hand at purchase dont need help selling
call 423 285 335one leave message if dont answer or text