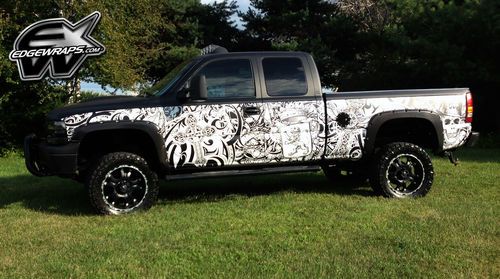 Condition: UsedA vehicle is considered used if it has been registered and issued a title. Used vehicles have had at least one previous owner. The condition of the exterior, interior and engine can vary depending on the vehicle's history. See the seller's listing for full details and description of any imperfections.Seller Notes:"Truck has small tear in both driver and pass seats. Truck has 234,000 miles. Everything works cold air very very clean truck."
This is a very clean high mileage truck.
Truck was purchased new by my neighbor in 01 he drove it to GM
to work everyday 40 miles then he sold it
to my father that drove it to port Huron & Ann Arbor to work. My
father owned the truck for several yr's. I then got the truck 3
yr's ago and it has been a great truck 2 yrs ago I did most of the work
and have drove it always wrapped with my companys information
advertizing and it is now time for me to upgrade bought a new big boat
this has been a great truck and has always had everything kept up.
When I ever had to replace anything I always upgraded...
Here is a list of everything that has been done since truck was new by all owners.
brakes 3 times last 224,000
exhaust 2 times 2 yr's ago
trans rebuilt at 209,000
intake changed at 180,000
alternator at 227,000
fuel pump at 218,000
manifold gaskets at 227,000
alignment checked every spring
ball joints 2 times last time 224,000
idler & center link 2/3 times last time 227,000
oil has been synthetic most of its life every 5k
U-joint 3 times last was 227,000
new tires 295/55 R20 1.5 yrs ago lots left
20 inch rimes 1.5 yrs ago no scuffs of issues
3 inch keys front lift
repl. stock 2.5 rear lift block w/6 inch engineered block
3 inch body lift
new windshield last month
Pocket style fender flares 1.5 yrs ago
Roof lights 1.5 yrs ago
bull bar 1.5 yrs ago
added rear bumper spot lights 1.5 yrs ago
new Rancho shocks front 1.5 yrs ago
new Rancho shocks rear 2 months ago
New custom wrap 2 months ago
Bed Liner & bed mat both
New blue tooth CD player last week
tinted windows 3 yrs ago
bug shield & custom grill 1.5 yrs ago
AC filter changed & recharged 4 months ago
Battery last yr
Rockers and cab corners replaced all new metal 6 months ago
only small rust under rear flares not that bad but some.
Truck has always been clean and been reliable I think I covered the
history of this truck rather well if you know the LS motors
you know they are good for an easy 350,00 miles the engine does not smoke
uses almost 1/2 quart of oil between oil changes. I am sure i missed some details
but if you have any questions please feel free to ask I will do my best to answer.
This truck is listed out front of business for sale so I may have to end early in the even that
someone makes a local purchase thanks for looking.