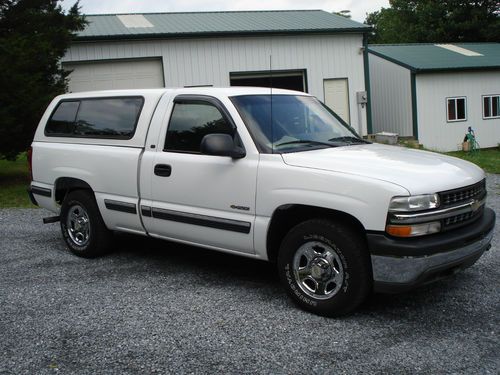 Hello! Up for auction is my 2000 Chevy Silverado short bed, regular cab, with 171,575 miles on the truck. The truck has a 4.3 V6 engine, with 2 wheel drive and a 4 speed 4L60E automatic Transmission. It has manuel windows and locks, aftermarket JVC CD player, aftermarket cruise control. This truck is in great condition for it's age, it runs and drives great, the transmission shifts nice and smooth and the engine has good power. There is some surface rust on the bottom of both rocker panels (see pics), but overall the exterior is in great shape. The interior is great shape as well. I have recently replaced the intake gasket, because it had a small coolant leak, which now is fixed. During the installation of the intake gasket, one of the front intake bolts broke, the intake does not leak any fluid, just thought I'd mention that. I also replaced the oil pan gasket and rear main seal, the transmission input and tail shaft seals were replaced while installing the rear main seal as well. There are no leaks of oil or transmission fluid, everything is nice and dry underneath the truck. Also, the coolant was flushed during the installation of the intake gasket. It has new shocks, the tires are good and the breaks are good. I have all the receipt for parts installed. I am selling this truck as is, no refunds. If you have any questions, please feel free to ask. If you would like to come look at the truck, that can be arranged as well.

My preferred payment method is cash in person.
On Aug-04-13 at 20:18:57 PDT, seller added the following information:

I also have the truck listed locally, so I have the right to end the auction due to local sale.