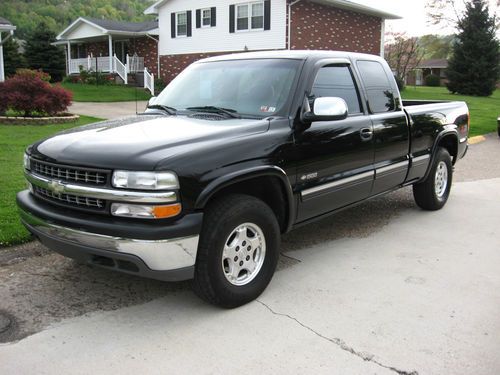 Awesome super clean 1999 Silverado LS package 4X4 three door extended cab. Fully loaded with all power options and leather interior. 5.3 V8, automatic transmission with overdrive and tow package. This truck has been up to this year garage kept and babied for all of its 14 years. Oil changed every three thousand miles, trans flushed I believe two times and coolant flushed every other year. Tires have approx. 15000 miles on them, rear brakes are new as well as rotors, front brakes are good. With the exception of a small utility trailer this truck has never towed anything. Seats are very nice. Bed interior does have some light scratches but no dents. Paint as you can see does shine nice. But it does have a few rock chips, remember its not a new truck. Carfax does show that it has had a front bumper put on it due to a neighbor backing into it and the passenger side was repainted due to a low speed scrape down the side. No parts needed to be replaced just some paint work. This was all verified by the original owner. Everything works on the truck as it should. There is a quarter size dent on the roof and at one time there were full length running boards on it so there are a few holes low on the under body that was repaired. There is no rust that I see anywhere other than maybe a spot of surface rust on a door interior. No disappointments here. Truck also is for sale locally. I will end the auction early for the right price, make me an offer. No warranties, truck is being sold as is. No trades. If you have 0 feedback email me before you bid or I will cancel it.