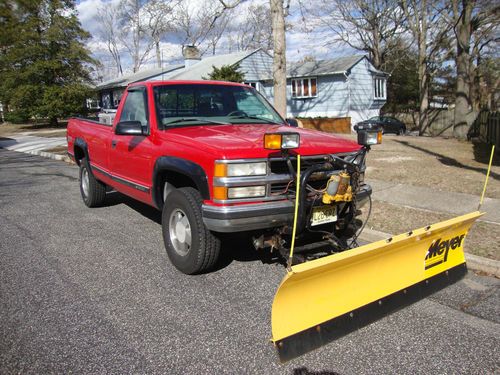 For sale is a 1998 Chevy k1500 4x4 Z71 pickup. This truck has a ton of new parts and runs great. One thing that it needs is a new catalytic converter. The plow works great and was hardly used. Parts that have been replaced are; two new o2 sensors, exhaust donuts, new, muffler, new gas tank with sending unit and straps, new gas lines, all new stainless steel brake lines and rubber lines on the whole truck, new master cylinder, new front rotors, calipers, pads, 4 new shocks, 2 new tires, new tailgate hardware inside and out, new xl radiator, heater core, all coolant hoses on rad. and water pump were replaced, new water pump, thermostat, new external trans cooler, and a solid new rebuilt transmission with a 3 year transferable warranty. The truck comes with a bed liner, tool box, and a Meyers power angle snow plow that is in great shape. It has two new plow lights, and a spare hydraulic line. All the fluids on the truck have been changed; brake, motor oil, trans, transfer case, front differential, and rear differential, coolant. A full tune up was done on it which included plugs, cap, rotor, wires, air, fuel, and pcv filter. Also a new battery, alternator, belt tensioner, fuel filler neck, and probably some stuff i have missed. Previose owner fixed a little rust that was on top of the frame in front of the bed where the crossmember is do to mulch and dirt sitting in it and rusting it out. It has been repaired and welded up with new patch metal. The truck is sound and I have filled it with firewood and had no problem hauling it. The truck is in great shape, and as you can see everything has pretty much been replaced. The paint on the truck is in great shape and shines real good, and the body has no rust that i could find. it does have some scratches and dings from being used as a work truck. Interior is not ripped and is real clean. I was counting on a bad winter and didn't want the truck to break down so i replaced anything that needed to be. The truck doesn't smoke or knock, and shifts great, and 4x4 works great. The truck has a little 164,000 miles, and the trans might have 3,000 miles on it. it has power windows, locks, and mirrors, and vent visors.  If there are any question just email me and ill get back to you asap. thanks