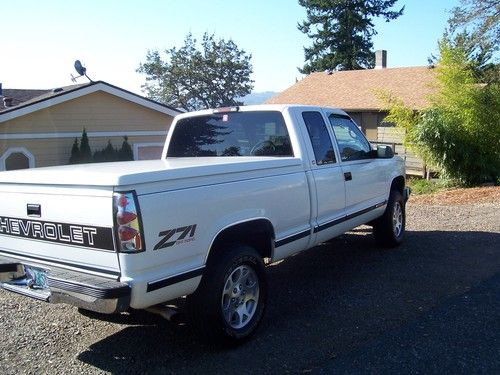 Here is an exceptionally Nice Straight Chevrolet Silverado. Short-Bed, Extra Cab, 4x4   These Chevys are getting harder and harder to find, At least Nice ones,  No Rust Issues, No dents, Nice interior, Does show normal wear and tear, Truck has been adult owned, Same owner for the past 8 years. Haas the 5.7L V8, Runs Great, No weird Noises, No check engine light, Transmission Shifts perfect. Has Power Windows, Door Locks, Mirrors, Power Seat, Heat A/C, CD Player, Tires are at Least 50% or Better, Brakes are New, Exhaust in great shape, Everything works like it should, Has a Hard Tonneau cover with electric remote. If you have been looking for one of these Silverados, then you owe it to yourself to check this one out. I did just set it on a lot to sell so it is subject to early sale. Any questions you can give me a call:  360-560-1771  Or send me an email and I will get right back to you. Thanks, Randy  rredell@aol.com