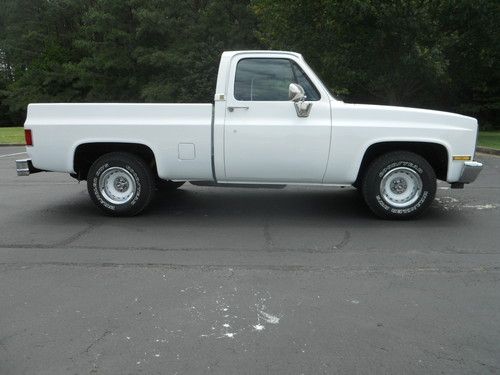 You are looking at a very nice almost mint 1987 custom silverado Chevy,For a start this is a list of the new (less than 100 miles on these components) parts
Tires
brakes
lower ball joints
tie rods
front end alignment
AOD transmission
drive shaft
windshield and gasket
sliding back glass
tune up
shocks
paint
The truck had a bed off Restoration as seen in the photos the fender emblems and lower chrome trim were removed this was her1st paint job.
The paint is a Lexus blue pearl tricoat professionally refinished with ppg waterborne paint
There were only three bad spots on the body and they were professionally cut out and prefab patch panels were installed by welding and panel adhesive also all emblem and trim holes.
All original interior except a crash pad cover is on the dash
You can look far and wide and not find a nicer truck than this
Runs out strong a/c blows cold no rattles or squeaks
All work was done by professionals not back yard garage  action here
Please serious inquiries only Willy 804-307-4891