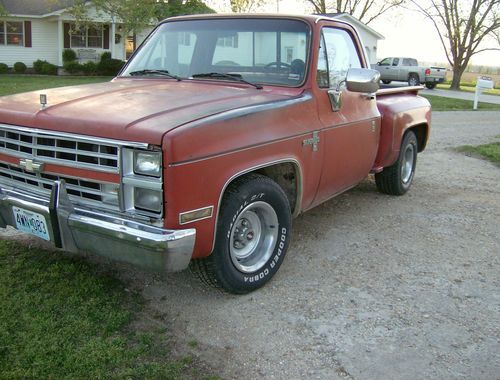 FOR SALE 1985 CHEVY SILVERADO,TRUCK HAS NEW MOTOR WITH LESS 5000 MILES ON IT,ALSO HAS A NEW REBUILT 700 4R TRANSMISSION,NEW HEADERS,NEW DUAL EXHAUST SYSTEM,650 HOLLEY CARBURATOR,NEW TIRES,I DRIVE THIS TRUCK DAILY I HAVE NO PROBLEM WITH IT VERY DEPENDABLE TRUCK,IT HAVE SOME RUST ON PASSENGER DOOR AN ON THE CAB CORNER DRIVER SIDE HAVE A LITTLE RUST, BUT I HAVE A RIGHT DOOR THAT GO WITH THIS TRUCK.MAKE AN OFFER