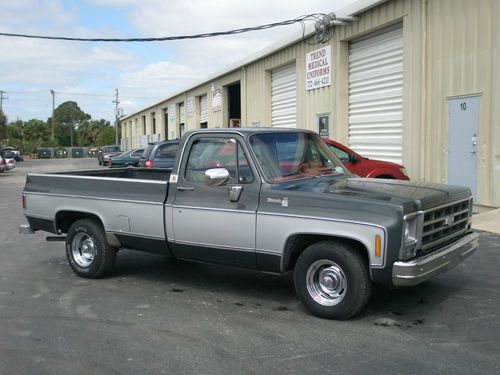 1979 chevy silverado longbed pickup,this is an unrestored  truck I have owned since 1997, it had only 68696 miles on it at that time,it has less than 90000 on it now.. always garaged used once in a while to do work around my properties, it has a/c , tilt wheel, dual tanks,chrome wheels,bed liner,ss bed rail protecters.it runs and drives very good,a/c works, I have to charge it about once a year, it has been updated to the new freon. I had the truck repainted about 5 years ago its close to the orignal color,it has a dash cover and seat cover on it,I replaced the headliner when I bought the truck its sagging and needs to be done again.this is not a show truck,but if your looking for a very clean good running old chevy pickup you can have some fun with this might be the one for you.the truck is located in fort pierce,florida,its being sold "as is","where is", very low reserve for a chevy in this condition,hope it finds a nice home, good luck bidding.