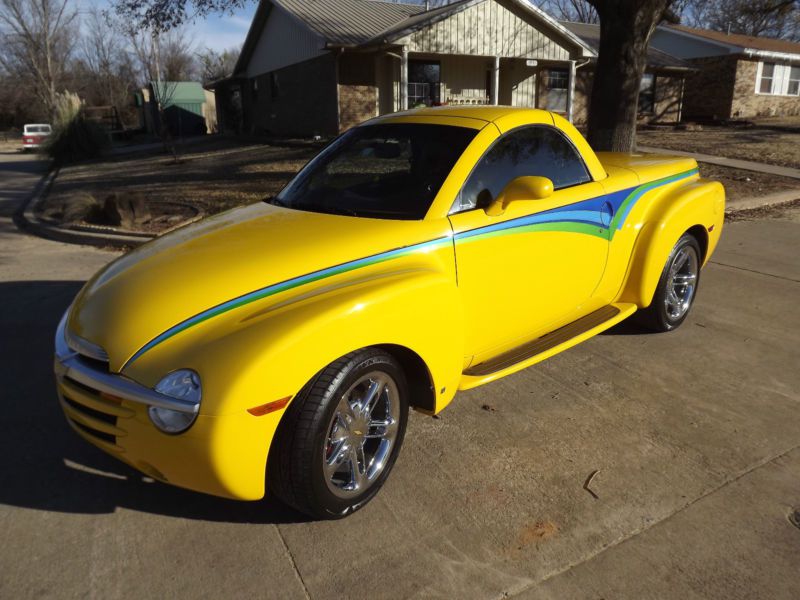 2005 Chevrolet SSR in Slingshot Yellow. Power retractable hardtop, convertible vehicle. This SSR has the LS2 6.0 liter 390 HP V8 Corvette engine (available only in 2005 and 2006 SSR’s). It also has the fairly rare and desirable six-speed close-ratio Tremec T-56 manual transmission with the 9.5 in. Eaton heavy-duty limited slip rear differential. It has the 19 inch front and 20 inch rear factory chrome wheels (this car came with the alloy wheels and I traded them for a set of the same size factory chrome wheels) which have had new Firestone Firehawk tires mounted on them of the same size as the factory tires (I am not sure at what mileage the original tires were replaced with these new ones, but the tread on these tires is extremely good, with no excessive wear on any one of the tires, nor any uneven wear; the car tracks perfectly down the road—no pull to either side). It has the leather-wrapped steering wheel, factory leather seats (that have no tears or imperfections) and the factory SSR logo Floor Mats with decorative piping. It has the ZQ8 Sport Performance Suspension with independent front and five-link rear design.

This car was also ordered with the Color-Keyed Package with Running Boards, which included the cargo area carpeted bed with color-matched slats, the yellow engine cover insert, the color-matched running boards, and the color-matched three auxiliary gauge cluster (voltage, delivered torque, and outside temperature) located in front of the transmission center shifter and console. This car was also ordered with the Towing Package, which includes a lockable (two keys) rear hitch extension that inserts into a frame cross member with wiring pigtail, etc.