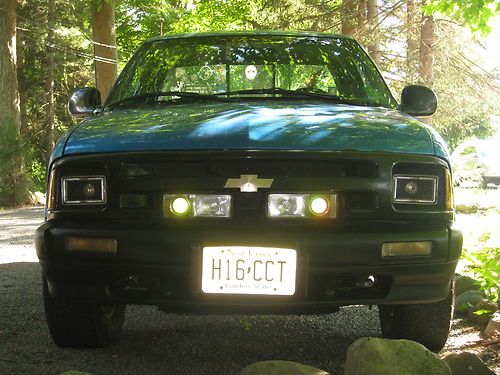 Condition: UsedA vehicle is considered used if it has been registered and issued a title. Used vehicles have had at least one previous owner. The condition of the exterior, interior and engine can vary depending on the vehicle's history. See the seller's listing for full details and description of any imperfections.Seller Notes:"Power steering just went cannot afford to have this truck fixed. NO CEL light but ABS is ON.it is a little hesitant on steep hills, needs tuneup. i am no mechanic. bought a year ago from a mechanic. Has random nicks and a few dents through out. front bumper has a good dent on left side wich cracked grille as well from accident prior to my ownership. grille has been repaired and both have been painted black. cracked windshield, bent wavy hood, rot patched in cab corners, 4x4 works but shifter is tough to get back into 2x2. good inspection in NJ for another year,brake is grinding on driver side. missing some small trim pieces, motor is all there.starts and runs, tough to drive with the bad brake and steering. rot underneath in back that needs attention. driver mirror was broken when bought, reattached to truck. Is a well used truck with alot of miles please see pictures because i am no mechanic original owner reported accident about 9 years ago. Has always been reliable"
For sale 1995 CHEVY S10 LS 4X4 extended cab. Needs work, or for parts.

I will start by saying this truck is not road perfect right now.
She was my everyday driver till last week when i was
cut off, and had to slam the brakes to avoid a collision. the driver side front brake is grinding and from what i
can tell the power steering pump went as well, the steering feels tight as if it has no power steering but the fluid is full,
hence my conclusion, but i am no mechanic.
I cannot afford a mechanic to fix her problems and i have no time or the space
to even attempt the job. if you know how to work on vehicles then you shouldnt
have much of a problem getting this one road ready in little time from what im told its a fairly simple truck to do work to if you know what your doing.

i will disclose everything i know about the truck be it good or bad to the best of my knowledge.

-Tires still have decent tread left on them but the front passenger has a slow leak somewhere.
usually have to add some air after 5-7 days.

-Passed NJ state inspection  still has about a year left.

-Skull shifter and custom mounted horn button on the side of stick for easy reach.

-Engine is a Z code 4.3 6 cylinder Vortec and has plenty of power despite mileage "roughly 245,000"
oil changes and basic fluid top offs have always been done on time according to the original owner.
even in these tough times i have kept up with the maintinence till these last few weeks. oil is still good for another 1000

-Rotten gas and brake line have been replaced. rear line replaced front to back with new splitter.

-Replaced rear axle pumpkin gasket and cover. Along with a cleanout and new fluid.

-Interior Dash in great shape all lights and gauges works.
Driver seat has small tear on left and is getting pretty worn out.

-Extended Cab with Fold in seat

- OEM cassette player, not the best radio but the sound quality is pretty good for what it is.

"THE BAD"
some of these things i will list are petty and simple fixes,
but i will list them nonetheless to be honest and fair with you.

-Steering is tight. It could be driven but its difficult to make sharp turms.
i believe the Power steering pump is the culprit.

-Hit a deer at 35 mph, the results are...
A cracked winshield
hood is dented and wavy, still closes opens and latches.
i would recomend both be replaced " hood for looks and winshield for tickets."

-Rear driver shock mount was broken off when i purchased it, friend attached a small frame structure around the actual frame to be able to mount shock in place. have not had any problems with it.

-Muffler leak, or a blown out muffler. from what im told it has a thrush glass pack on it but theres no identifying labels or marking.

-Could use a new cap and rotor. has a bit of hesitation when goin up steep hills or quickly accelerating. although the engine feels powerful it lacks pulling power

-spare tire is in the bed of the truck, the mechanism to hold it underneath is far to rusty to work.

-Rot - in corners of the cab near the back from water building up in there. cut off the rot, primed the rust and screwed
sheet metal panels to cover the holes. Under rear of truck is rusty .need work near leaf springs.

-Rear fender lip around tires are rotted. not horrendous, and the worst of it is on the passenger side.
Could use some t.l.c.

seems to be a common problem for pick ups.
Front fenders are in great shape

-Driver Door sags a little so you need to shut door harder than normal, very heavy doors.
Also has a dent in the lower part of it. not very deep but more wide than anything.

-missing a tail gate strap, some trim pieces by the windshield corners due to the deer,
also missing square trim piece to go around tailgate handle. wich does open and close.

- driver mirror was broken off but reattached.

Like i have said already, this truck is not perfect. it is an 18 year old truck with its fair share of issues,
but it has also been a reliable 40 mile a day vehicle for the last year just until recently. up to you wether it becomes
your new driver, parts for your old driver. or a pile of scrap. thanks for looking.

I am selling this truck AS IS. i cannot be held responsible for the vehicle once it leaves the driveway.
i have listed everything i know about it. if you have any questions about something you dont see here
please feel free to contact me.

payment to be recieved at end of auction.
local pickup only i will not ship this vehicle
it is located in warwick new york 10990.