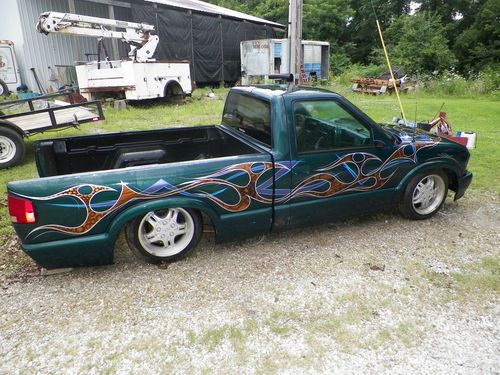 Condition: UsedA vehicle is considered used if it has been registered and issued a title. Used vehicles have had at least one previous owner. The condition of the exterior, interior and engine can vary depending on the vehicle's history. See the seller's listing for full details and description of any imperfections.Seller Notes:"MOTOR IS BAD IN TRUCK!! and has some bad spots which are pictured"

1996 S-10    MOTOR IS BAD!!!!!! truck was running when parked but either has a blown head gasket or a cracked head. Truck has custom paint job and custom suspension work with a 4 link on rear of truck with coilover suspension, and 11in coilsprings on front. Truck just needs alittle tlc and could be a nice truck once again ,could fix the motor in the truck or turn into a v8 truck or just use for parts. I have lost the keys but have purchased a new key assy for the truck. I have priced this truck to sell and also have the truck listed locally so can remove at anytime. If need any more info can text or call 270-302-9046 thanks Scott