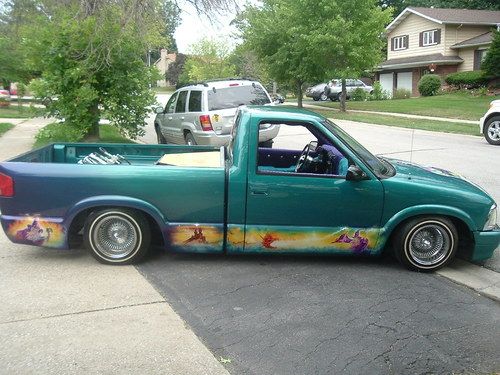 Condition: UsedA vehicle is considered used if it has been registered and issued a title. Used vehicles have had at least one previous owner. The condition of the exterior, interior and engine can vary depending on the vehicle's history. See the seller's listing for full details and description of any imperfections.Seller Notes:"BODY AND ENGINE ARE IN VERY GOOD CONDITION."
UP FOR SALE IS A 1994 CHEVY S-10 LOWRIDER.TRUCK HAS A 4 PUMP PRO HOPPER HYDRAULIC SET UP.ALL CROME PUMPS.3 SEARS DIEHARD BATTIRES.THE PAINT IS TEAL WITH PURPLE FADE IN THE BACK AND MURALS AND HAS A MOLDED IN ROLL PAN.13" PLAYER KNOCK OFFS.MOST OF THE UNDERCARRIAGE IS POWDER COATED.THE STEREO SYSTEM IS ALL MEMPHIS AUDIO.2 12" SUBS,3 AMPS AND 2 CAPACITORS.YOU ARE GOING TO NEED A RADIO.THE INTERIOR IS TEAL AND PURPLE VELVET.THE INTERIOR IN THE BED WILL NEED TO BE FINISHED.THE TRUCK RUNS GREAT AND HAS WON MANY AWARDS INCLUDING BEAT PAINT AND BEST MURALS.ALL SERIOUS OFFERS WILL BE CONSIDERED.AND YOU ARE MORE THAN WELCOME TO COME LOOK AT THIS TRUCK IN PERSON.