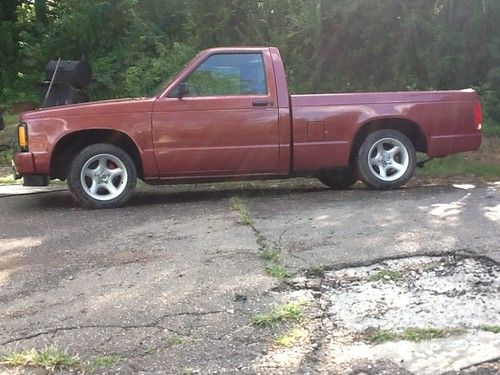 Condition: UsedA vehicle is considered used if it has been registered and issued a title. Used vehicles have had at least one previous owner. The condition of the exterior, interior and engine can vary depending on the vehicle's history. See the seller's listing for full details and description of any imperfections.Seller Notes:"THE HISTORY REPORT SHOWS THAT THERE IS A PROBLEM WITH THE TITLE AND MILEAGE...WE NEVER HAD ANY TROUBLE WITH THE TITLE SO I AM ASSUMING IT HAS SOMETHING TO DO WITH THE FACT THAT IT DOES NOT HAVE THE ORIGINAL MOTOR IN IT....THERE ARE A COUPLE OF INDENTS ON THE TAILGATE AND THE FLYWHEEL IS MISSING A COUPLE OF TEETH....THE SEATS ARE BUCKET SEATS FROM OUT OF A CAMERO AND THE INTERIOR IS IN DECENT SHAPE"