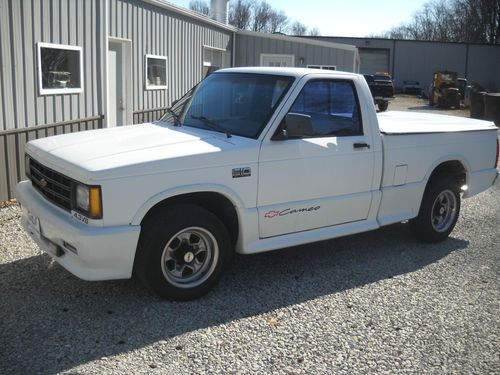 1989 CHEVY S-10 CAMEO.VERY RARE TRUCK IN 1989.LESS THAN FORTY WERE PRODUCED.HAVE ALL DOCUMENTATION PROVING ITS AUTHENTICITY SINCE NEW.A FILE FOLDER FULL OF PAPERWORK WITH ORIGINAL OWNERS MANUAL,INCLUDING DOOR JAMB DECAL DETAILING ITS PRODUCTION IN LOUISIANA.IT HAS NOT BEEN RESTORED,BUT WAS RESRAYED IN EARLY 90'S DUE TO PAINT DELAMINATION,OF THAT ERA.RUNS AND DRIVES EXCELLANT.BODY IS STRAIGHT AND STILLWEARS ORIGINAL CAMEO GROUND EFFECTS EXCEPT FOR REAR ROLL PAN,AS A BUMPER AND REESE HITCH WERE ADDED.HAS A LEER SOLID BED COVER ON IT,AND HAS BEEN MOST ITS LIFE.BED IS CLEAN.ARE A FEW SMALL SURFACE RUST SPOTS ON BODY,LESS THAN DIME SIZE.WORST RUST IS IN INSIDE BOTTOM OF TAILGATE.PROBLY NEEDS REPLACEMENT.THIS TRUCK CAME STOCK WITH4.3 FUEL INJ.ENG.,AUTO TRANS.,FACTORY DUAL EXHAUST,AND 15 IN.STEEL RALLY WHEELS,WITH GOODYEAR EAGLE ST TIRES.INTERIOR IS CLEAN,BUT HAS WEAR ON DRIVER SIDE.DASH HAS A COUPLE OF CRACKS FROM SUN DAMAGE.TRUCK IS NOT PERFECT,BUT I FEEL ITS ABOVE AVERAGE CONDITION FOR ITS AGE AND IS VERY RESTORABLE OR JUST ENJOY AS IS.THE TRK WAS OWNED BY AN OLDER MAN WHO BOUGHT NEW,AND ONLY DROVE IT A FEW MILES TO WORK EACH DAY.I KNOW THAT SOUNDS CLECHE,BUT ITS TRUE AND THE CONDITION SHOWS THAT IT HAS NOT BEEN ABUSED.MOST OF WHATS WRONG WITH THIS TRUNK HAS BEEN CAUSED BY IT NOT BEING DRIVEN ENOUGH! TIRES SHOW DRYROT,BUT OTHER THAN THAT,I WOULD NOT BE AFRAID TO DRIVE THIS TRK. ANYWHERE LIKE I SAID,FEWER THAN 40 WERE MADE.DO YOUR HOMEWORK,AND WITHOUT A DOUBT,THIS IS A DOCUMENTED SURVIVOR. FEEL FREE TO CALL ME AND DISCUSS ANY QUESTIONS YOU MAY HAVE AT812-522-1221