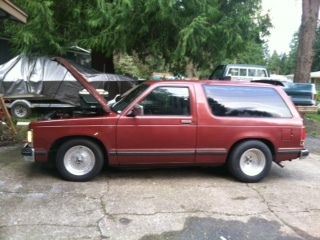 1985 Blazer 383 Stroker, camel hump heads edelbrock intake, carb, th350 with shift kit B&M shifter stall converter, flowmaster exhaust, heddman headers. Has some dents on roof from tree damage, Overall body isnt in bad shape. The motor is very strong and will chirp tires through the gears, its a blast to drive, and does really well as a cruiser, but definetly hauls when you want too. There is some damage to the roof due to a limb falling on it, and one dent on the hood, other than that it is a awesome little hot rod. I have an affidavid in lieu of title, which is the same as a title in the state of washington, the previous owner misplaced the original but it has all been cleared through the DMV. I will provide a state bill of sale and a signed affidavid in lieu of title, just so there is no confusion. I will answer any questions to the best of my ability. Thanks and happy bidding! I will not ship the vehicle if you want it you can arrange pick up of vehicle. I do reserve the right to end auction early if vehicle sells locally first.