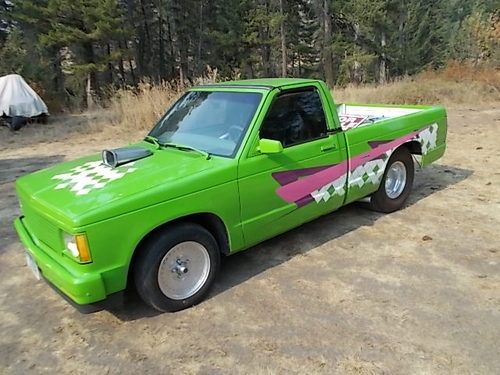 For sale is a custom 1982 Chevrolet S-10 Pro Street Truck.  Chevy Small Block 5.7L 350 Carburated V-8 with 9" Ford rear end (narrowed and tubbed).  Custom fuel cell, custom in-dash gauges, power steering and power brakes.  2000 RPM stall.  Custom Interior with custom racing seats with five point harness.  Custom interion roll bar with removable top.  Mickey Thompson Racing Tires all the way around with custom alluminum wheels.  Scooped air intake.  Completely Street legal with clean title.  This truck has all the bells and whistles and would make a perfect truck for driving around town or taking to the race track.  Over $12,000 invested in this beauty.  You will not be disapointed in this truck.  Email or call me at 406-546-7610 for more information.  Serious inquirys only.

Buyer is responsible to pick this truck up outside of Missoula, MT or arrange for transportation at buyers expense.