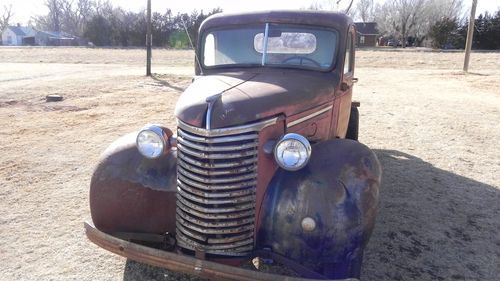 1939 CHEVY PICK UP....... TRY TO FIND A RUST FREE, ORIGINAL THAT RUNS AND WILL DRIVE. ONE TINY RUST SPOT ON THE LOWER DRIVERS DOOR [SEE PICTURES] ORIGINAL WOOD IS GOOD IN THE BED, COVERED BY METAL. WINDSHIELD CRANKS IN AND OUT SMOOTHLY, WINDOWS ROLL UP AND DOWN AS THEY SHOULD. DOORS LATCH PROPERLY. FROM ESTATE OF ORIGINAL OWNER,\. HE HAD THE 216 ENG REBUILT TEN YEARS AGO. STARTED TO TAKE APART FOR REPAINT. REAR FENDERS AND PERFECT RUNNING BOARDS IN THE BED. NOTICE THE FOUR 15" ARTILLARY WHEELS. I HAVE THE MATCHING SPARE. READ CAREFULLY--I DO NOT RESPOND TO QUESTIONS THRU EBAY....SERIOUS BIDDERS MAY CONTACT ME AT  SUPERSTOCK1@LIVE.COM    or CALL MARK AT 580 829 3170  9am-9pm CST. THIS TRUCK IS FOR SALE LOCALLY AT 4995.00 SUBJECT TO PRIOR SALE. MAKE SURE TO CHECK WITH YOUR WIFE, KIDS, AND DOG BEFORE PLACING A BID! IF YOU HAVE NASTY FEEDBACK YOUR BIDS WILL BE BLOCKED. LOOK AT MY FEEDBACK--I HAVE SOLD OVER 100 CARS ON EBAY........HONEST DESCRIPTIONS MAKE FOR HAPPY CUSTOMERS.......NO DISSAPOINTMENTS HERE!  CALL FOR PAYMENT INFO