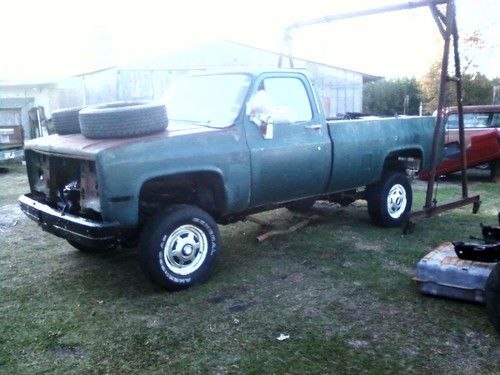 This project started off as a 1980 4x4 Surburban 3/4 chassis, rolling rusty body off an updating with a total of 6" of body lift with a jegs steering shaft, which bed mounts have been lost to stickie fingures,installing a 3//4 ton 1986 forestry pickup truck with clear title(n.c.) with this recently rebuilt 350 four bolt main with 4bbl carb 1980 turbo 400 tranny with cast iron transfer case with front spicers 1980 4.10 gears that pulls like posi,replacing rearend from floating axle 14 bolt to86' forestry 14bolt locking differengial also 4.10 gears,. truck still needs radiator support rewelded for lowering in front of engine, shifter rod extended, hole cut in floor for transfer case shifter, gages reinstalled wiring hardness for front clip reinstalled battery box-tray lowered or longer cables, brakes need to be refurbished yoke on rearend has two broke bolts,and i have 5 16x9.25 white wagon wheels like new without tires and still have most all parts to complete job but the effort,time or money.reserve the right to end sale due to advertised local also.also have the turbo 400 tranny that came out of forrestry truck needs rebuilt lost second gear