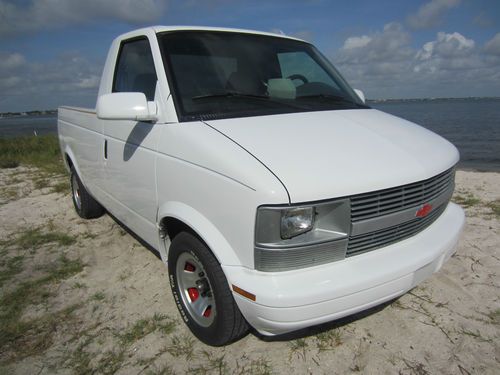 Step up to a custom built one of a kind Astro pick-up. It is a real head turner, show stopper and it gets all the looks. I have over 500 hrs and $18,000.00 in time and materials invested in this show cruiser- beach truck. Body and paint are two years old.
New are the radiator, AC compressor, evaporator, dryer, heater core, water pump (is 6 months old.) Has new serpentine belt and belt tensioner and upper and lower hoses are brand new.
Interior is fair (for beach truck or work truck) and not finished.
New tires, brakes and alignment have under 5,000 miles.
The transmission was completely rebuilt by professional transmission shop and has the 4 speed with over drive, engine and trans has no leaks and does not smoke or burn oil. Oil is changed every 2,500-3,000 miles with filter. Front shocks are new (gas) drag link and idler arm are 1 year old. Front windshield is brand new tinted and wipers are also new. Driver and passenger power window motors are new.
Back lift gate works and so does its wiper.
This truck is my daily driver, very dependable. This is a real fun truck to drive a (show truck.)
This truck can also be a great tool for advertizing a business because it really turns heads, double looks and people taking pictures and videos.
I'm asking $12,500.00 or best offer / trade.