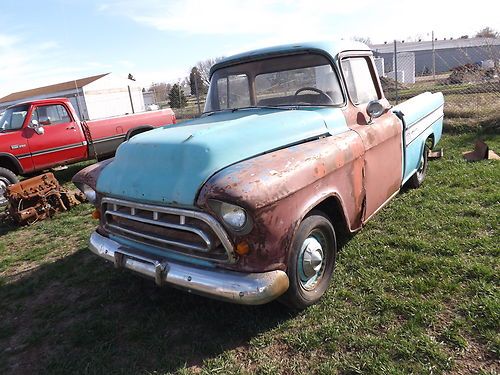 Condition: UsedA vehicle is considered used if it has been registered and issued a title. Used vehicles have had at least one previous owner. The condition of the exterior, interior and engine can vary depending on the vehicle's history. See the seller's listing for full details and description of any imperfections.Seller Notes:"This truck needs total restoration, but the hard to find cameo parts are there including a rust free box. In my opinion I think the cab is junk, and the crossmember has been cut and a powerglide put in it and plates welded to the frame for the front motor mounts. I think it was originally a V/8 truck as there is a plug in the floor where the starter was on a 6 cylinder and it looks factory, also the ignition switch has the start position on it.The fiberglass is in great shape but needs to be put on the good box. The stainless strips are nice but all the potmetal is pitted and will need replated.The spare tire carrier is there but the hinge is junk and somebody put barn hinges on it at one time.The bumper guards are all solid but need to be fixed and replated.I would like it picked up in 30 days but can store it longer if needed as long as its paid for.If you have any questions let me know.Clear open iowa title"

EVERYTHING IS LISTED IN THE CONDITION REPORT