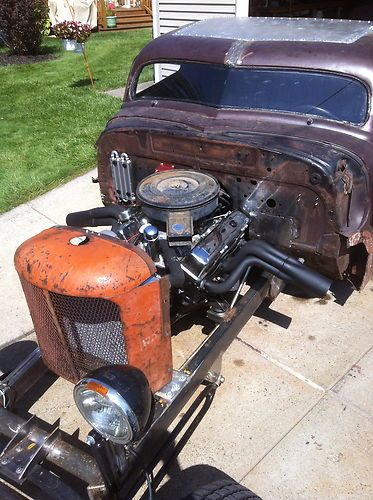 Condition: Used: A vehicle is considered used if it has been registered and issued a title. Used vehicles have had at least one previous owner. The condition of the exterior, interior and engine can vary depending on the vehicle's history. See the seller's listing for full details and description of any imperfections. ...
49 CHEVY PICKUP CAB RAT ROD
TURN KEY READY TO GO
THE CAB HAS A 8 INCH CHOP
FRESH CUSTOM BUILT 2 X 4 CHASSIS
IT HAS A 127 INCH WHEELBASE
350 CHEVY CUBIC INCH SMALL BLOCK
TURBO 350 AUTOMATIC TRANNY
ALUMINUM RADIATOR WITH ELECTRIC FAN
CHEVY S-10 REAR AXEL WITH COIL OVER FOUR LINK SUSPENSION
A TUBE AXEL WITH SPRING BEHIND WISHBONE FRONT AXEL
VEGA CROSS STEER GEARBOX STEERING
BUYER IS RESPONSIBLE FOR ALL SHIPPING OR PICKUP DETAILS
FOR MORE INFO AND PHOTOS CHECK OUT THE 2 YOUTUBE VIDEOS OF THE BUILD AND THE FINISHED PRODUCT
GO TO YOUTUBE  AND IN THE SERCH BOX PUT IN DARREN716 AND BOTH VIDEOS COMEUP
OR USE THE LINKS BELOW
THE 2 TITLES ARE
49 CHEVY RAT ROD BUILD DARREN716
49 CHEVY RAT ROD FOR SALE DARREN716