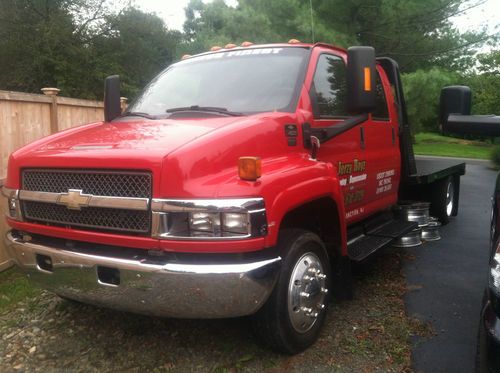 2007Chevrolet Kodiak C4500 toy hauler. 4 door with sleeper option. power folding rear seat. Captians chairs in the front. The 6.6L duramax motor has 8 brand new injectors, yes NEW not remanufactured. The radiator is almost new. Truck has aluminiam rims all around, 19.5 in rims. there are two spare tires for the front and 1 spare for the rear. This truck has an auxilerly fuel tank that is 100 Gallons plus two 25 gallon fuel tanks stock. The bed is a texas truck body hauler with upper and lower lights, all LED. the bed is almost new. As of right now the bed only has a gooseneck hitch and a bumper pull hitch. Either will pull whatever you put on them. The rear of the truck has firestone full size heavy duty air adjust suspension. there is a gauge and switch to change the ride hieght. The engine has an exhaust brake and will stop the truck very well without touching the brakes even with a full load. If you are looking for a truck to pull anything from a horse trailer to a 4 to 10 car trailer this is the truck. It is in almost perfect condition and has been a southern texes truck for most of its life, so no rust!