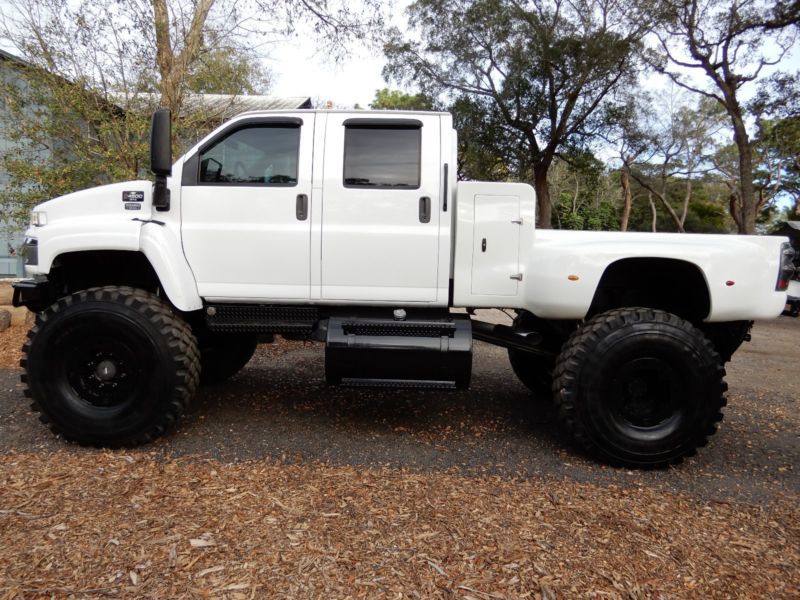 Please message me with questions at: ryanrccornelious@essexman.com .

THIS IS A TOTALLY CUSTOM 1 OF A KIND 06 KODIAK SUPER RARE 4X4 W/ 35+K MILES. CUSTOM LIFT W/ ATLAS SPRINGS, AIR
BAGS FRONT AND REAR, DUAL STEERING STABILIZERS, 20" CUSTOM MADE STAZWORKS WHEELS ON 53" MICHELINS, 5.31 GEARS FRONT
AND REAR, BUILT ATS TRANSMISSION, PPE PROGRAMMER, K&N AIR INTAKE. IT HAS A 1 OF A KIND CUSTOM BED MADE SPECIFICALLY
FOR THIS TRUCK WITH LIGHTED STORAGE BOXES ON EACH SIDE, 4 FUEL TANKS (1 MADE WITH THE BED, 1UNDER THE BED AND 2 ON
SIDES WHICH ARE TRANSFER TANKS), CUSTOM MADE FRONT AND REAR TUBULAR BUMPERS, 15,000LB WARN WINCH, 3,000 LUMEN LED
HEADLIGHTS, TRAIN HORNS POWERED BY VIAIR 475 COMPRESSOR, SECOND AIR COMPRESSOR WITH TWIN TANKS TO POWER AIR BAGS
AND SEATS AS WELL AS HAS A QUICK DISCONNECT VALVE IF YOU NEED TO USE AIR FOR THINGS LIKE PUMP UP TIRES, OR AN AIR
TOOL, ETC... OTHER UPGRADES INCLUDE TINTED WINDOWS, KENWOOD IN DASH TV/GARMIN NAVI AND HIGH END JL AUDIO STEREO,
ALL TOP OF LINE JL COMPONENT SPEAKERS, JL AMP, 10" JL W6 SUB IN JL BOX AS WELL AS 13" TW5 SUB, AND BEST VIPER
ALARM SYSTEM W/ REMOTE START. TRUCK AND BUILD COST JUST UNDER 300K
THE TRUCK IS LOADED UP WITH LEATHER SEATS W/ AIR RIDE, CRUISE CONTROL, AND ALL THE POWER OPTIONS. IT DRIVES
AWESOME AND AT 80 MPH YOU CAN DRIVE IT WITH ONE FINGER.
100% GUARANTEED TO TURN HEADS ANYWHERE YOU GO. IF YOU DON'T LIKE ATTENTION, THIS ISN'T THE TRUCK FOR YOU BECAUSE
EVERYWHERE YOU GO PEOPLE WANT TO CHAT WITH YOU ABOUT IT AND TAKE PICTURES OF IT. WOULD MAKE A GREAT PROMOTIONAL
VEHICLE! THIS TRUCK HAS ALWAYS BEEN BABIED AND NEVER BEEN ABUSED OR OFFROAD.