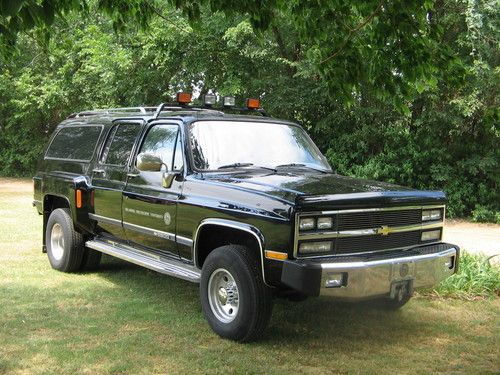 Condition: UsedA vehicle is considered used if it has been registered and issued a title. Used vehicles have had at least one previous owner. The condition of the exterior, interior and engine can vary depending on the vehicle's history. See the seller's listing for full details and description of any imperfections.Seller Notes:"Excellent"

1989 Suburban 2500 4x4 this was used in the filming of the movie Twister,it was the suburban the Jonas team used in the movie, still has camera mounts under the running boards original California truck also has Oklahoma movie  prop tag used in the movie, Truck has 65K original miles has new GM 350 crate motor with less than 300 miles has factory tbi fuel injection with new fuel tank and fuel pump, turbo 400 auto with 3:73 limited slip rear axle, tires excellent shape has new a/c compressor with 134a freon front & rear air works great, four wheel drive works like it should, truck is in excellent shape all power options work including cruise control, many new parts, has working 10k warn winch front bumper, factory tow package with electric trailer brake control, very unique truck with a movie history past.