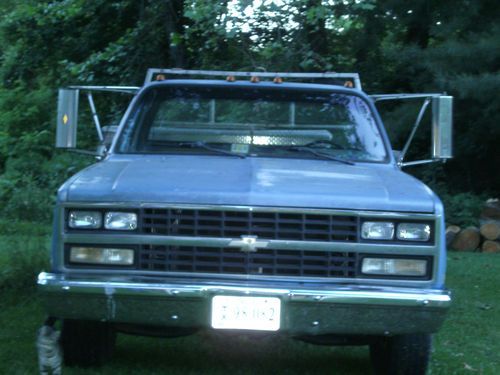 1986 c 30 ton chassis truck good shape for year solid body dependable. Truck has 454 engine with 4 speed and granny low. Regular driver and used in buisness of tree removal and trimming have put old truck to test over last 21 months and it has really done me well. I bought truck fron family member who is a real chevy enthusist he used for hauling junk cars on trailer then got hurt he said truck was good and it has been. I did put brakes and flywheel ring and starter in last 6 months truck has never left me stranded has been dependable. Truck has PTO where it was a dump but hoist and pump are not there pin holes in back of frame for dump to piviot still there. PTO COULD BE HOOKED TO WINCH ALSO If DESIRED OR CONVERTED TO WRECKER because of long wheelbase.  Truck has ball in hidaway box in bed for gooseneck and also permanent pintle bolted above reece receiver truck is very versatile with long bed removable sides work lights on back behind cab hate to let go but bought med duty and selling this one will make someone a good truck engine is very desirable for chevy fans. Thanks for looking good luck. QUESTIONS CALL 276-613-0933 TRUCK SOLD AS IS NO WARANNTY also for sale locally so auction may end prematurally. MILES UNKNOWN AS DASH WAS CHANGED AND GRILL OFF 1988 MODEL TRUCK odometer quit working aug 2012 approx small crack in windshield but passed inspect last year sticker exspired oct 2012.