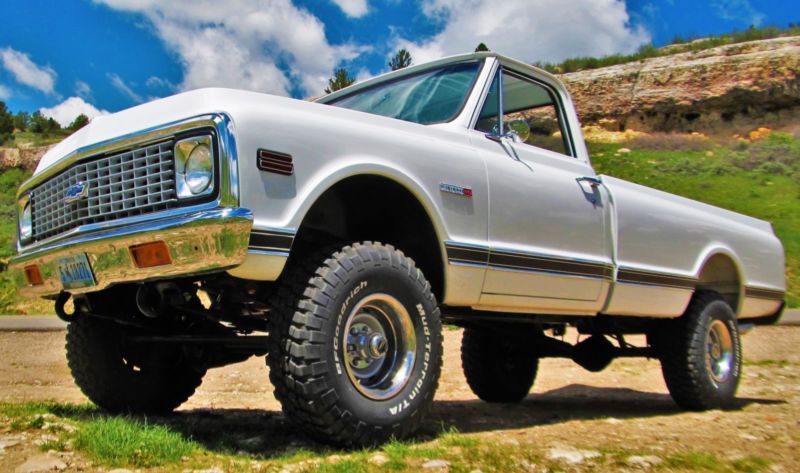 This truck was fully restored last year driven to a few shows and parked. #s matching 350/350 Both fresh and
new Every part and bolt is either new or refurbished ALL parts are nos or genuine GM parts. the pictures speak
volume. I have full documentation of the resto and thousands of pictures as well. This truck is an A/C cab. This is a pristine 1971 Chevy truck. N.A.D.A. is 32-34k Original block with
World Machine 202 heads Edlebrock 650, True dual exhaust with welded Thrush mufflers Headman headers 24'' chrome
echo tips no leaks and sounds Awesome!! New 33x10.50 BFG M/T's New chrome beauty rings & center caps new warn
hubs, Full Kenwood system 6x9s and 6'' door speakers the head unit as a Kenwood Bt30bu Bluetooth iHeart radio Media
player. Nos lock & key set. new chrome bumpers front and back. New nos Grille plastic truck sits on a 4inch Rough
country lift New front leafs block in the rear. The bedside tool box is completely rebuilt and is 100% rust free
like the rest of the truck, The tail gate is fresh sheet metal with fringed handle relocated inside the bed. New
17gallon fuel tank, new carter electronic fuel pump. New Carpet & Upholstery, New seat belts, Clean glass and
rubber, windows roll down easy & smooth. All new Nos Emblems New chrome nothing was spared on vanity pieces. The
cab & bed were taken off the Frame was blasted & coated with gloss black Epoxy along with the axles. new hardware
through out the truck the fit and finish is nice Great Detail. If you have any further Questions Don't hesitate to
ask or message me for Phone# so we can talk Thank you and Thanks for looking!!!!