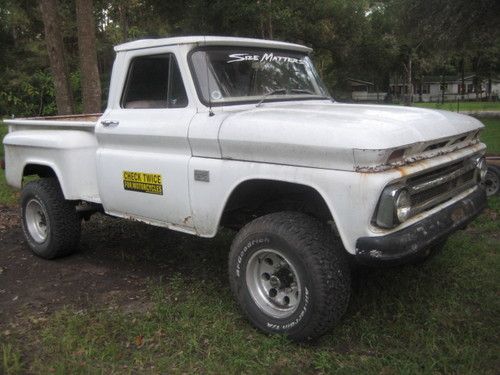 Condition: UsedA vehicle is considered used if it has been registered and issued a title. Used vehicles have had at least one previous owner. The condition of the exterior, interior and engine can vary depending on the vehicle's history. See the seller's listing for full details and description of any imperfections.Seller Notes:"Daily driver"

Up for auction is my 1965 chevy truck. Reserve is set low and I may lower it more, I need to sell!  Its is a C20 frame that has been cut and shortened to fit a short bed. Chevy never made a short bed c20 in 65. Truck goes down the road straight, it was well done. Looks like it was a frame off maybe 15 years ago. There is some rust coming through on the rockers and hood. No rust on the bed. Floors are very solid as well as all frame supports. There is a spot coming through on the drivers side roof visor outside. No rust on the inside. Interior is very nice with a kick ass stereo. Motor is a 327 or 283 or 350, I don't know. It runs good and does not leak. I check the oil regularly and never had to add to it. Dual exhaust with headers that don't leak. Edelbrock carb, HEI Distributor. She runs very good and starts rite up. Clutch was changed before I got it as well as brakes and brake lines. 4 wheel drive works good. I pulled my friend out when he buried his truck in my front yard after we removed some stumps. All 4 of my tires were spinning so maybe its posi? Wheels have 8 lugs, springs are heavy duty, 33x12.50-15 BF Goodrich tires have lots of tread. Its geared low for working, tops out at 65-70 mph. Everything works except the headlight switch. It went out 2 days ago and I have not fixed it yet. tail lights work, blinkers, brake lights, but headlights wont come on. So I wired direct to plug to get home and unplugged it when I arrived. This truck has a receiver on the back that mounts all the way up to the rear axle. It will pull down the gates of hell. Please ask any questions you may have. This is an auction, that means high bidder wins it so know what your buying before you show up and say its not as described. I have no reason to hide anything so don't hesitate to ask. This is my daily driver. The only reason its for sale is because my 6.5 turdo diesel dually blew up and I need another truck for hauling.