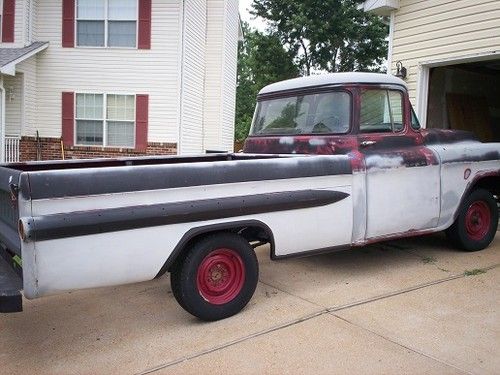 Condition: UsedA vehicle is considered used if it has been registered and issued a title. Used vehicles have had at least one previous owner. The condition of the exterior, interior and engine can vary depending on the vehicle's history. See the seller's listing for full details and description of any imperfections.Seller Notes:"Overall good condition. No rust. Most body work completed. Needs front bumper, horn button on steering wheel hooked up."

59 Apache 3100 Deluxe version. The deluxe had stainless trim around the windshield, doors and sides of the bed. If you are looking for an original style truck, this may be for you. No major upgrades or replacements that have maintained the original operation or appearance. Too many projects and not enough time to finish. I was told that the motor, transmission, rear end, and brakes had all been rebuilt. It runs and drives real good. Engine idles a little rough, probably an adjustment. The bed was removed and the frame, under the cab and inside bedside, and bed support framing was all coated with POR 15. Has 4 brand new radial tires. Ebrake and all lights and turn signals, wipers work. 1 dent on drivers side bed and a few holes drilled for tie downs I assume. Otherwise I believe ready for paint unless you like the patina look. 235 6 cylinder with manual 3 on tree shifter. New original guage cluster. All guages work except temp guage and speedo acts up sometimes.  Has oogah horn currently with push bottun on dash. New gas tank installed. Had dual carb intake manifold, converted back to original single carb but dual manifold and extra carb included. Comes with lots of extra parts including New windshiled with sun strip, stainless windshield trim, fornt and rear window gaskets, retro am/fm radio, new antenna, all emblems, glove box, 12v original new wiper switch and chrome knob, horn relay, set of new horns, new tailgate, new wiper arms and blades, replaced original turn signal switch, new steering wheel horn button,  Mr Shifter floor shift conversion kit, assorted firewall gaskets and more. Sold as is. Buyer responsible for pickup, transportation and shipping of vehicle and all parts. I reserve the right to cancel this listing at anytime as this vehicle is listed several places unless my reserve has been met. Thank You and God Bless America