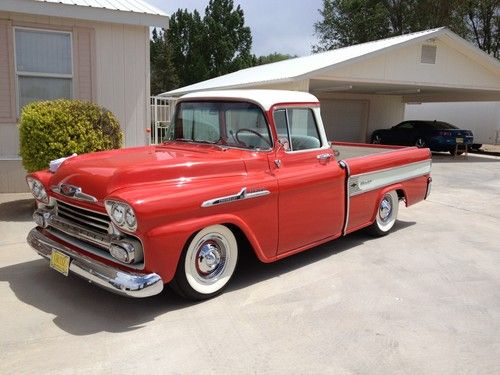 Condition: UsedA vehicle is considered used if it has been registered and issued a title. Used vehicles have had at least one previous owner. The condition of the exterior, interior and engine can vary depending on the vehicle's history. See the seller's listing for full details and description of any imperfections.Seller Notes:"1,000 miles on odometer. truck Is 100% restored to new condition."

This 1958 Cameo is as nice as they come. 100% restored with 'NO' expense spared. This cameo is a original southwest V8 auto truck and was rock solid to began with. 1,405 1958 cameo's were made making it the most rare truck produced by chevrolet. This cameo is a 283 automatic truck which makes it that much more rare and desired. This truck has a vintage air which is not OG but makes driving it much more enjoyable durning the hot seasons. This truck has a 3inch fat man drop axel which is not OG but gives the truck a real cool aggressive look. OG axel can very easily be repaced. In the rear this truck has three leaf spring's removed to match the front stance. OG leafs can also easily be replaced. All OG leafs are new and will go with the truck. This truck took ten years to complete and shows even better in person, if you can believe it. This truck will 'NOT' dissappoint, runs and drives like new, Everything work as it should. Odometer just turned 1,000 miles on complete restoration. Any question's please call Wray at 505-927-3168 Please no trades and am in no need to sale it, so only real buyer's call thank you for reading. I do not have any part's for cameo's sorry.