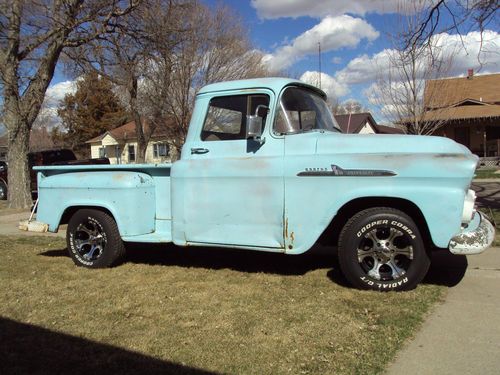 THIS IS A 1958 CHEVY APACHE. THIS WAS MY UNCLES TRUCK WHEN I BOUGHT IT ON 2007 HE WAS DRIVING IT TO WORK EVERY DAY 20 MILES ROUND TRIP. I BOUGHT IT AND DROVE IT TO WORK AND THEN PUT IT IN STORAGE IN 2009. I PULLED IT OUT TODAY PUT A LITTLE GAS IN IT AND CRUISED AROUND TOWN FOR ABOUT THIRTY MINUTES BEFORE I TOOK PICTURES. TO THE BEST OF MY KNOWLEDGE THIS IS AN ORIGINAL TRUCK.  THE DICK CEPEK RIMS AND COBRA TIRES ARE NEW OF COURSE. I WILL LEAVE MY PHONE NUMBER AND ANSWER ANY QUESTIONS YOU MAY HAVE OR SEND MORE PICS IF YOU LIKE.THE RESERVE ON THIS TRUCK IS FINAL! DO NOT TRY TO CALL AND LOW BALL ME IF IT DOESN'T MAKE RESERVE PRICE.I HAVE NEVER SHIPPED A VEHICLE BEFORE SO IF YOU WANT IT SHIPPED YOU WILL MAKE ARRANGEMENTS. I AM WILLING TO TAKE A DAY OFF AND SEE TO IT THAT IT IS LOADED AND WELL TIED DOWN FOR WHATEVER SHIPPING COMPANY YOU GO WITH.I WILL DELIVER ANYWHERE IN NEBRASKA FOR 1$ PER MILE ONE WAY.DOES NOT INCLUDE MY TRIP HOME. I AM EASY TO GET ALONG WITH. LANCE (402)376-4529.