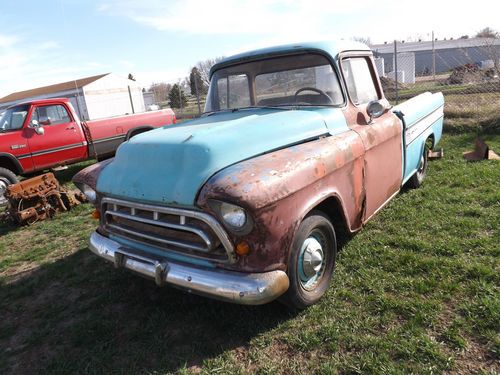 This will be a project for somebody thats not afraid of work but you wont have to spend time and money looking for the hard to find parts.

I dont know if its the original engine or not but somebody put a powerglide in it and cut the crossmember in the back and welded plates to the front crossmember for the front motor mounts.

There is a steering column 6 cyl motor and hydramatic transmission with crossmember that i took out of a 57 chevy van that goes with it. (i drove it 6 miles before taking them out years ago)

As you can see in the pics the fiberglass sides and chrome strips are in great shape, all the pot metal will need plating. The inside of the box is in poor shape but there is a rust free  one that goes with it that only has 2 small dents.

(the round tubes arent even rusted out which is unusual)

I think the trim rings are nos

The tailgate is solid but will need the cover fixed, both latches work yet. All the other hardware is there but one retractor is missing the hook.

The spare tire carrier is there but the hinge is shot. The bumper ends and bumperettes are all solid but will need to be refurbished.

In my opinion i think the cab is junk and would look for a donor cab for it. All the glass is good.

Take a good look at all the pics and if you have any questions or want any other pics let me know.

It has a clear open iowa title and personalized iowa plates that say 57 cameo from 97-98 that were never put on.