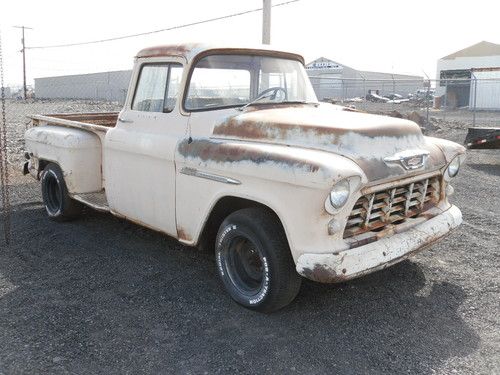 UP FOR SALE IS A 1955 CHEVROLET 3200 PICKUP.  HAS A V-8 MOTOR THAT DOES RUN WITH 4 SPEED MANUAL TRANSMISSION.  SOME LIGHTS WORK.  CLUTCH IS STUCK FROM SITTING AND BRAKES DON'T WORK.  THIS CLASSIC TRUCK NEEDS TOTAL RESTORATION.  BED FLOOR IS ORIGINAL BUT NEEDS RESTORED. CAB FLOORS ARE SOLID, DOES NOT APPEAR TO BE A RUST-BUCKET. BODY IS PRETTY STRAIGHT EXCEPT THE FENDERS AND A NICE EXTRA SET OF FENDERS ARE INCLUDED WITH SALE.  CLEAR TITLE AND OWNERS MANUAL.