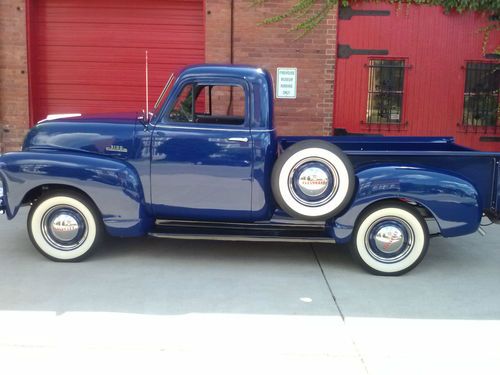 Condition: UsedA vehicle is considered used if it has been registered and issued a title. Used vehicles have had at least one previous owner. The condition of the exterior, interior and engine can vary depending on the vehicle's history. See the seller's listing for full details and description of any imperfections.Seller Notes:"Beautiful frame-off restoration in 2009 with 983 miles since restoration. The 1953 engine, trans and rear-end (3:55)have all been redone. All the gauges work as does the fog lights, turn signals and heater. Fire extinguisher was an option in 1953, it is for show only. The side-mounted spare first came out in 1953 and this has the original mfg markings. This truck is show room clean and a pleasure to drive. Please call 734.552.9333 or email any questions."

Beautiful frame-off restoration in 2009 with 983 miles since restoration. The 1953 engine, trans and rear-end (3:55)have all been redone. All the gauges work as does the fog lights, turn signals and heater. Fire extinguisher was an option in 1953, it is for show only. The side-mounted spare first came out in 1953 and this has the original mfg markings. This truck is show room clean and a pleasure to drive. Please call 734.552.9333 or email any questions.I have more pics and encourge an on site visit and test drive.