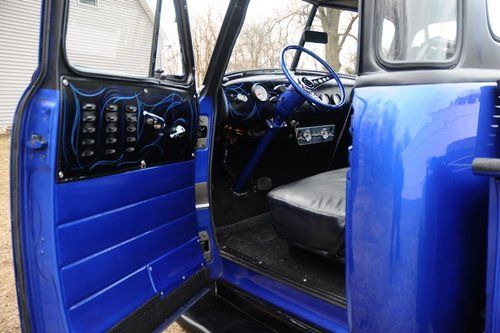 1953 Chevy Pickup Truck.  Blue with Matte Black.  The motor is a 1998 vortec 350 bored.30 over. comp cam extreme roller hydrolic cam.  Brand new exhaust with flow masters.  Less than 100 miles on the rebuild.  Carburetor is a holly 650 double pumper.  Transmission is a turbo 350 with a 2400 stall and less than 10 miles on the rebuild, Mustang 2 front end.  Rear end is a 10 bolt out of a chevy nova.  All new phantom gauges.  Truck bed is Rhino lined.  Truck is bagged with 7 inches of lift.  Has shaved handles.  Remote door poppers and brand new bluetooth Alpine stereo. I am a first time seller so if I have missed anything please email or call me at anytime.  269-470-9467   rsantaniello@sbcglobal.net