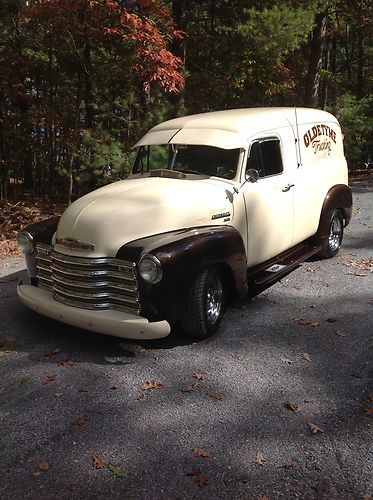 Condition: UsedA vehicle is considered used if it has been registered and issued a title. Used vehicles have had at least one previous owner. The condition of the exterior, interior and engine can vary depending on the vehicle's history. See the seller's listing for full details and description of any imperfections.Seller Notes:"This truck is a driver. Has scratches and dings like any used vehicle has. The headliner needs to be repaired because the radio was removed and placed in the glovebox."

Very nice 1951 chevy panel truck. Was done a few years ago with the best equipment. Has a small block 327 with double hump heads, power steering, power brakes. Aluminum radiator, electric fan and a 400 turbo trans. Runs good, taking it to ocean city this weekend so the mileage will change. It has a camera sub frame and a 373 posi rear. Disk brakes in the front. Drums in the rear. Has tilt steering, vdo gauges, and all work as needed. Radio in the glove box.The headliner needs to be repaired, i removed the radio and consel from there and havn't repaired it. The paint does have a few blemishes and is not perfect. gets alot of thumbs up while driving and going to car shows.  You really need to come look at this truck and see it for yourself.  I'm sure I forgot a lot but will be more then happy to answer all questions as best I can. Call. Tom. 302-270-3472. Thanks for looking. i reserve the right to remove this vehicle at anytime. it is for sale locally.  good luck!!