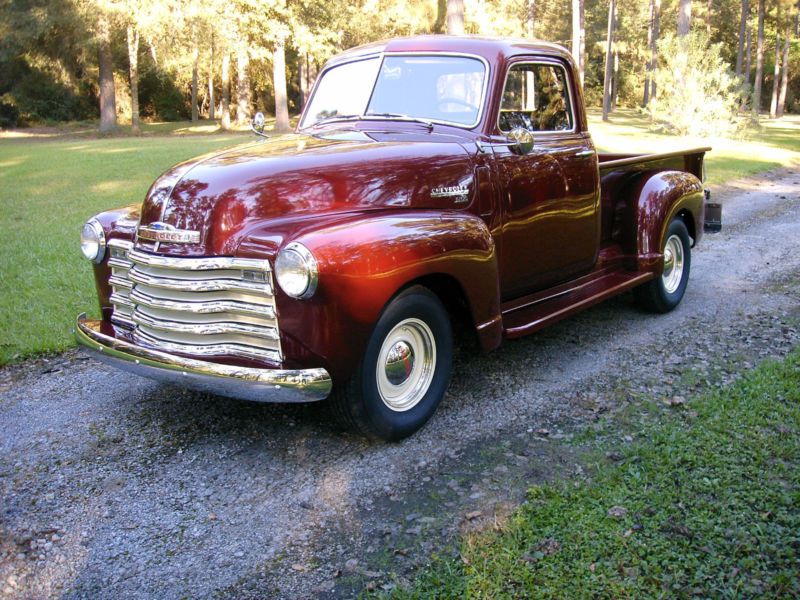 If you have any questions feel free to email: silastricamo@netzero.net .

I bought this pickup out of southern California about a year ago. It had been a California truck for as long as I
could go back and it went through a frame off restoration around 6 years ago in San Diego. It needed very little,
but I did make a few changes to my liking.The older bias belt wide whitewalls were replaced with blackwall radials,
the grill was replaced as well as the front bumper as they were showing a little pitting. The wheels were painted
ivory to match the grill slats and a rubber floor mat was put in to replace the carpet. The wiring was cleaned up (
it's 12 V converted with an alternator ) and the lights that didn't work do now including turn and brake. A few
other minor items but that's basically it.
I have no history on engine work, but the truck runs and drives well with the 4 speed standard on the floor
and it stops straight and true. No unusual noises going down the highway at speed. A lot of work has gone into this
build as the pictures should show, it is not show fresh but very nice with quality brandywine paint showing only
minor imperfections. Glass is new with new gaskets and door channels. The doors have new locks and open with the
keys as does even the glovebox. It has a split manifold with dual exhaust - all new.