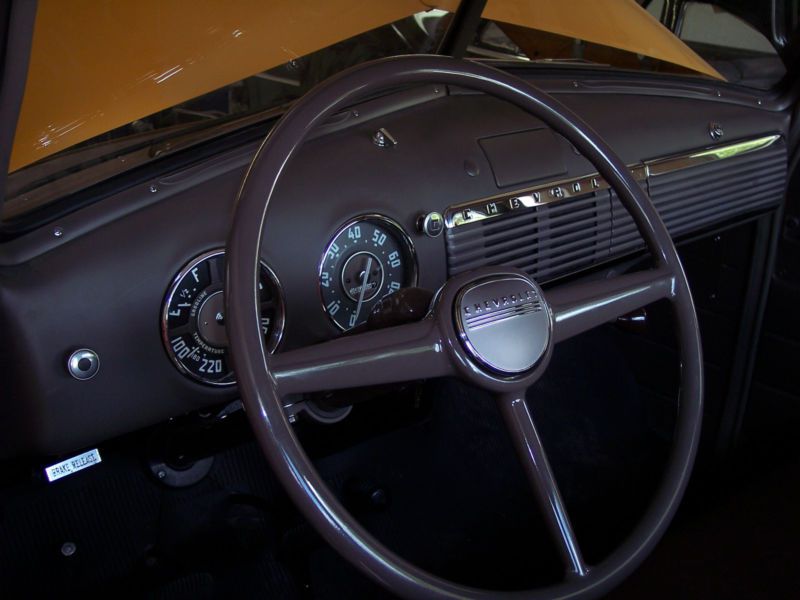 SELL THIS FINE '49... IT WAS ORIGINALLY ONE OF OUR FAMILY PROJECTS THAT WAS TO BE PASSED ON
FROM ONE GENERATION TO THE NEXT. HOWEVER, TO OUR DISMAY, WE FOUND THAT MANY IN THE UPCOMING GENERATIONS ARE MORE
INTERESTED IN CELL PHONES AND FACEBOOK THAN IN AN OLD CLASSIC CHEVY TRUCK.. THAT THE MOST SOUGHT AFTER OF THE EARLY CHEVROLET TRUCKS IS THE 'ADVANCED DESIGN' SERIES PRODUCED FROM 1947 THROUGH
1953..MANY PREFER THE '49 SHORTBED, 1/2 TON, AS THESE WERE LIGHT DUTY HAULERS IN THEIR PUREST FORM. OURS ALSO
HAS THE LIGHTEST GROSS VEHICLE WEIGHT RATING OF ANY OF THE 1949 CHEVY TRUCKS.. THIS WOULD INDICATE THAT IT WAS
PURCHASED AS A LIGHT DUTY HAULER AND AS SUCH, LIVED A RATHER PAMPERED LIFE..IN OUR CASE, IT WAS PROBABLY
TRANSPORTING GOOSE FEATHERS TO A PILLOW FACTORY. THE WEIGHT RATING IS ONLY 4600 POUNDS AND IT HAS A CURB WEIGHT
OF ONLY 3100 POUNDS.. NOW, IF WE WERE FORCED TO DO THE MATH, THAT SOUNDS LIKE A PAYLOAD OF ONLY 1500 POUNDS MINUS
THE WEIGHT OF THE PASSENGERS.. NOT EXACTLY HEAVY DUTY HAULING, IS IT ? ? ACCORDING TO THE IDENTIFICATION NUMBER
THAT IS FOUND IN THE FRONT LEFT DOOR JAM, OUR TRUCK WAS BUILT AT THE KANSAS CITY, MISSOURI ASSEMBLY PLANT IN JULY
OF 1949..
OLD CARS PRICE GUIDE
TOP VALUE RATED OF ALL 'MASS PRODUCED' CHEVROLET TRUCKS
CHECK IT OUT FOR YOURSELF...GO TO ANY OF THE MAJOR BOOKSELLERS, BORDERS, BARNES & NOBLE OR MAYBE YOUR LOCAL
NEWSTAND.. PURCHASE A COPY OF THE 'OLD CARS PRICE GUIDE'. THIS PERIODICAL IS CONSIDERED TO BE "THE" PREMIER VALUE
PRICE GUIDE BY MOST OLD CAR ENTHUSIASTS... ACCORDING TO THIS PUBLICATION, THE CHEVROLET PICKUP TRUCK FROM 1947
THROUGH 1953 IS RATED TO BE THE MOST VALUABLE, MASS PRODUCED, CHEVROLET PICKUP IN THE COLLECTOR VEHICLE
MARKETPLACE TODAY !!! THESE TRUCKS ARE RATED EVEN HIGHER THAN THE ULTRA SCARCE PICKUPS OF THE EARLY 1930's AND THEY
HAVE A VALUE WHICH FAR EXCEEDS THE HEAVY DUTY IRON OF THE MUSCULAR 1960's..IN FACT, RECENTLY ONE OF THESE TRUCKS,
RESTORED TO ITS ORIGINAL CONDITION, BROKE OVER THE $50,000 MARK !
THE FAMOUS "STOVEBOLT 6"
ACCORDING TO WIKIPEDIA, THESE ENGINES DERIVED THE STOVE BOLT NICKNAME WHEN THEY WERE FIRST INTRODUCED IN 1929..
THEY WERE CONSIDERED AN ENGINEERING MARVEL AND IT SURPRISED MANY TO LEARN THAT NEARLY ALL OF THE EXTERIOR ENGINE
BOLTS WERE 1/4 INCH BY 20 THREAD...THESE WERE THE VERY SAME BOLTS THAT WERE USED BY MANY WOOD STOVE MANUFACTURERS
OF THE TIME, THUS; STOVE BOLT SIX.. AS CAN BE SEEN IN OUR VIDEO, OUR LITTLE TRUCK RUNS EXCELLENT, SHIFTS THROUGH
ALL OF IT'S GEARS CORRECTLY AND IT'S STEERING IS TIGHT AND TRUE..