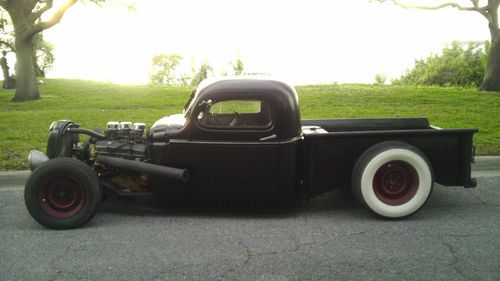 This 1947 Chevrolet truck will satisfy all you Rat Rod cravings.  This Rat Rod is chopped, channelled, and lowered with a Easy Street Air ride front suspension, and has rear air shocks with an air pump and tank.  Can also be raised and lowered 4 inches, adjustable. Could go over raised center medium, or lower to dazzle your friends, and was built to drive.  It is on a modern 1996 GM chassis for good control of the road, and has a good running 305 cubic inch small block with a two barrel intake and two extra added two barrel carburetors to give it that "six pack" look.  The Lakes style exhaust pipes have baffles, and can be adjusted to be really quiet or open headers.  It has a turbo 350 automatic transmission, and has a Walker radiator.  Has been driven daily for two years, and drove to the 2012 Turkey Rod-run at Daytona beach and cruised all weekend and drove home without any trouble.  400 miles in one week!  Safety features include power disc breaks (mounted under the floor), rack and pinion steering (very easy to drive), halogen headlights, turn signals, seat belts, the body is bolted to the frame using rubber mounts, and safety glass windshield.  However there is no emergency break.  The body has been sand-blasted, epoxy primed, and sprayed with satin black.  It has saddle bag storage underneath the bed.  If you have any questions or want more information feel free to email Mark.