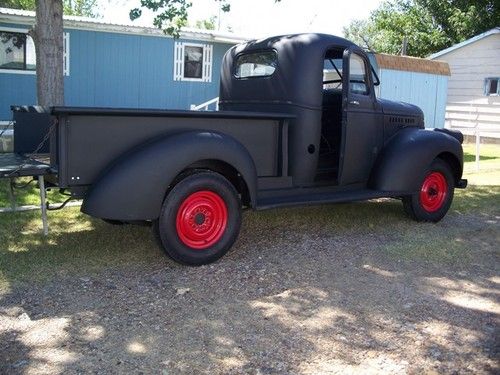 Engine has new fuel pump,filter and water pump, new oil seals, and valve gasket. Also has new coolant hoses and belt.   Engine was running and truck has been inside since the late 1990's.

Truck will need new brake lines and a wiring harness in order to run and drive.  I have the original harness and brake lines that could be made to work.  Will also need new battery and a few other small things that i can't think of right off hand.  The title is the Original and has never been changed over.  Has been signed on the back and notorized if someone ever wants to put the truck in there name.  We wanted to keep the original title so dad never had it changed.  Its titled in oklahoma. Also have registrations from 1960 to 1992.

The body of the truck is in very good shape with no rust or dents.  The front fenders and running boards could use a little work to make them perfect.  Grill has a few small issues and has been welded on near the top and bottom of the grill which is kind of hard to see  unless your right up on it.  The back glass has a crack but is plate glass and can be easly replaced.  The front and rear blinkers and glass are in boxes with a few other parts.  The seat is in good condition, the dash will need some work but is all there.