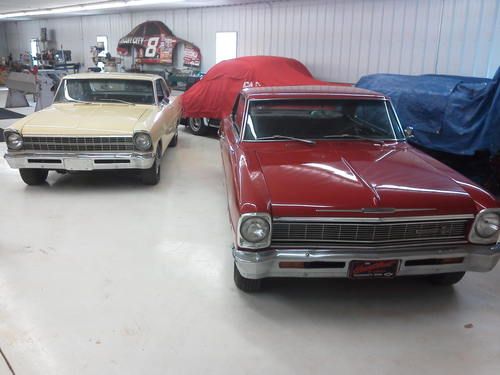 Condition: Used: A vehicle is considered used if it has been registered and issued a title. Used vehicles have had at least one previous owner. The condition of the exterior, interior and engine can vary depending on the vehicle's history. See the seller's listing for full details and description of any imperfections. ...
Selling 2 cars for the price of 1!
eBay thought our account was hacked and ended the bidding, so this is a re-list!
Both cars have been in climate controlled environment since 1980's and very rarely driven
The first car is a gorgeous yellow 1967 Chevy II Nova SS Clone 2 door hard top. This beauty is 99.9% restored, it is equipped with a stock 327 cubic inch V8 (numbers on engine are for 66 Chevy II), also has a powerglide automatic transmission. 10 bolt stock Chevrolet rearend, never been tubbed, no rust. One or both quarter skins have been professionally replaced during restoration. Yellow is the original color for the VIN of the car. Black vinyl seats with white stripes, all professionally redone upholstery, new carpet, power steering, disc brakes on front, drum on rear, stock AM/FM radio, SS hubcaps with factory 14" wheels. Headliner is not in the car, and there are a few minor interior trim pieces missing, but could possibly be located. All VIN numbers matched on car, but during restoration, one of the VIN plates were taken off and pop-riveted back on with normal rivets (not the factory look alikes that are available now), therefor the car now has new NC VIN number sticker in left door hinge post, but still retains clean NC title. Original VIN- 116377W14****
The second car is a slick red 1966 Chevy II Nova original SS 2 door hard top. Original 118 VIN car. Engine is a 350 cubic inch V8 out of a 70's model Corvette. It has a factory 4 speed Muncie transmission. All numbers match except engine. Car never was fully restored, but still in great condition. Has original black vinyl seats and seat covers, new carpet, new headliner, new door panels, stock look alike digital AM/FM tape player radio. Has SS hubcaps with factory 14" wheels. 10 bolt rearend, no rust holes, never been tubbed. Red is not the original color for the car. Paint code on the firewall is W-A (Chateau Slate-Tuxedo Black) VIN- 118376N12****
Mileage above entered is not exact mileage for either car.
Not Currently willing to separate cars at this moment. By the best of our research, if someone were to purchase both cars and take the engine out of the yellow car (67 model) and put it in the red car (66 model) they would have an all-matching numbers car.
NO TRADES ACCEPTED