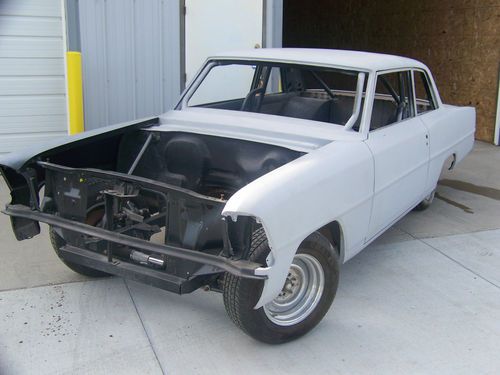 Condition: UsedA vehicle is considered used if it has been registered and issued a title. Used vehicles have had at least one previous owner. The condition of the exterior, interior and engine can vary depending on the vehicle's history. See the seller's listing for full details and description of any imperfections.Seller Notes:"body perfect shape!"

this is a 67 nova it would be easier to just say the only thing that is not new is the trunk lid and roof !

4 wheel disk brakes, new front fenders, new door skins, new quarter panels, new radiator support, new valance across rear of body, new custom floor boards, tubbed , custom built rollcage, the cage is formed in the dash as shown in pics, have all the glass except the windshield, have new headlight bezels and tail light rubbers as shown, 4 new tires with it never been mounted, mickey Thompson flamethrower brand notice the flames on the threads! the rears are 18.5 wide 29 tall , new wiring kit , fuel cell mounted and lowered in trunk fittings come out the bottom , I do not have a hood I do have bumpers but not show quality , would be good if needed them for a core charge,

also the firewall has been shaved and customized , also have numerous other items with car such as window channels , new inner fender wells, chrome , etc.

I have this car listed on private selling sites, reserve the right to withdraw this listing , forms of payment are cash or wire transfer only