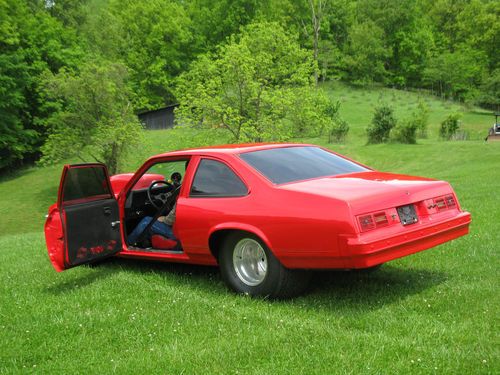 Ready to take to the strip or to the next car show, This 4th Gen Nova is in a class of it's own, it really turns heads when you go down the street. It has a nasty 383 stroker, dual Carter AFB's, Power Glide with after market converter, Full Gauges, Roll cage with swing out bars on both sides,Dana 60 rear with 458 gears, strange axles, fuel cell and 2 battery's sit in a finished trunk area, the inreior is custom and in great shape, the rear tires are new MT Sportsman Pro's 33X19.5-15lt tucked inside tubs, the fronts are MT ET 26.0/4.5-15, all light work, The paint is a brite red that has a few nicks from normal road wear, but on a scale of 1-10 it is an 8.5+. Engine should be freshend, we are discribing as best we can, but email or better yet come see and judge for your self. I have a low reserve on this car and I am not willing to trade, no exceptions.