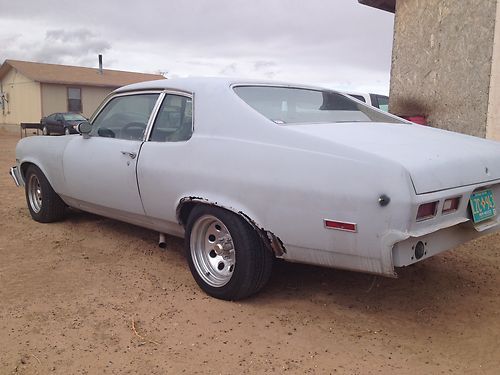 Condition: UsedA vehicle is considered used if it has been registered and issued a title. Used vehicles have had at least one previous owner. The condition of the exterior, interior and engine can vary depending on the vehicle's history. See the seller's listing for full details and description of any imperfections.Seller Notes:"Has right front fender damage from hit an run, also has rust in rear quarter panels"

Hello. I am selling my 1974 Chevy nova.i am not the original owner of this vehicle.i purchased it from Kansas, has clean New Mexico title now.it has tons of new parts that didn't come with it when I bought it.engine block is original and as you can see it is a project car.it has a inline 6, 4.1 liter with a 2 speed power glide transmission.needs a lot of work done but nothing major.it runs and starts right up but wouldn't chance on driving it do to conditions that need to be taken care of so it needs to be towed home..I installed a brand new 1 barrel Rochester carburator, radiator,power steering pump,head gasket,manifold gasket, choke pull-off,alternator, fuel pump,fuel filter,water pump and Rims and Tires..if purchased I would like payments to be sent thru PayPal.if also able to give me cash in hand an pick up that would be great.shipping has to be arranged by you if you live out of New Mexico.