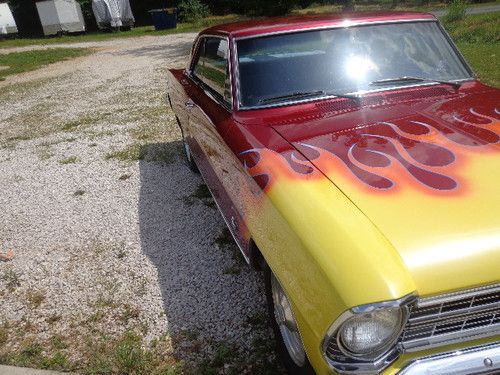 Condition: UsedA vehicle is considered used if it has been registered and issued a title. Used vehicles have had at least one previous owner. The condition of the exterior, interior and engine can vary depending on the vehicle's history. See the seller's listing for full details and description of any imperfections.Seller Notes:"small paint chips"

1967 ss nova clone. This is a very nice cursing car. car was a complete restore 7 years ago.

comes with a 383 stroker motor, angled plugs, demon carb, nice cam, headers. car sound very nice with enough hp to have fun but not to much that you can not run it all day. this car you

can curse any where. car has all the "ss" badging with a "ss" floor console. transmission is a 700r4 with a 2300 stall converter and shift kit and trans cooler.

rear end is a 12 bolt with 355 posi gears. car has lots of chrome, even the leaf springs are chrome, chrome hood hinges. chrome is in nice condition.

interior is nice with bucket seats. all the lights , signals, horn and defroster work.

paint is nice but is 7 years old. has a few chips. I touch up.

car is sold in as is condition. also I am selling it local so I have the rights to end the auction early.

to finish. 427 motor, borg warner 4 speed 12 bolt posi. look for it coming up on e-bay as a complete or almost complete. I have been building cars for 12 years. I am getting tired.