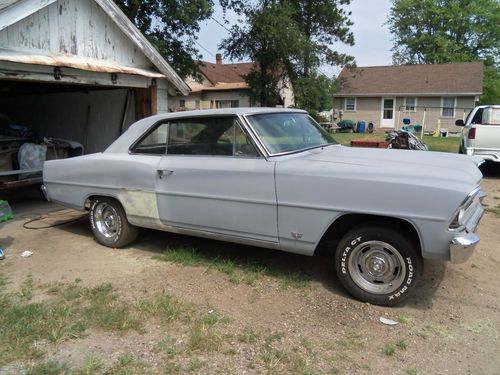 Condition: UsedA vehicle is considered used if it has been registered and issued a title. Used vehicles have had at least one previous owner. The condition of the exterior, interior and engine can vary depending on the vehicle's history. See the seller's listing for full details and description of any imperfections.Seller Notes:"This is a project car. Needs complete restoration. Roller, No motor or trans. Reserve right to end action at anytime."

Up for auction is a 67 chevy nova HARD TOP.  Body only, no motor or trans. rust free doors, fenders hood. Quarters can be repaired. Have a NOS driver lower quarter. Floors nd front loor pans. There are some small rust in front pans. the rest on back is good. Trunk pan solid as well as frame rails.What you see in pic`s is what your getting. Its not perfect, but a real good builder. No rust around glass. New windshield. ,Lot`s of parts in trunk . Have bucket seat braces .Nice 14 by 7 rally wheels and tires. Clear Indiana paper work. Ask question or give me a call 1-812-521-3245  Rick   I RESERVE THE RIGHT TO STOP AUCTION AT ANYTIME.